Fleet replacement in the Williams-Shapps era

This thought leadership paper sets out IPEX’s ideas for how the creation of Great British Railways could enable a new model for the development of new trains, providing economy of scale whilst maintaining free-market competition.

To minimise the barriers for a new DMU solution, a widely usable (diesel ‘S-Stock’) design of DMU platform for the UK networks would appear to be beneficial and necessary to increase the potential new build order quantity and spread the development costs (including for incorporating a Stage IIIB engine) to an extent that the procurement can be justified and competitive. An electric transmission and final drive with on-board energy storage would seem to provide a path to recovery / re-use of braking energy, reduction in the installed diesel power requirement and potentially a future conversion to electric traction supply – helping to assuage the residual value concerns.

Some seven years later the aspirations remain valid. Since 2014, three UK train operators have procured self-powered trains in the form of DMUs (1), all separately, through three different financiers and all of these feature a diesel engine coupled to a mechanical drive package. This is what the market was prepared to offer as a proven solution at lowest capital cost.

The time for letting the market decide may be passing; the arrival of Great British Railways (GBR) on the scene changes the landscape for rolling stock replacement quite significantly. Since there has been a period of substantial new fleet procurement in the past ten years, not least to solve the problems of accessibility for persons with reduced mobility, to remove the majority of diesel trains running under overhead wires, and to remove the Pacer type vehicles from the network, there is now opportunity for examining an alternative approach before any additional new trains are needed, other than for HS2.

Table 1 shows the oldest DMU fleets now operating, and when they would be likely to need replacement. Assuming a one-for-one quantity of vehicles replacing these fleets, this means that a steady pipeline of new train requirements exists from 2027, over a period of the following ten to fifteen years, as shown in Table 2, totalling around 2600 vehicles. 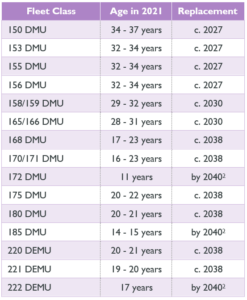 Caution is required in the assumption that a one-for-one replacement will be required since, for example, Avanti West Coast, has already ordered an EMU (3) fleet and a BMU (4) fleet to replace some of the Cl.221 DEMUs and these are due to enter service in 2022.

Table 2: Self-powered vehicles required (one for one)

In the EMU sector, there are also several fleets that are approaching end of life. Table 3 shows the oldest EMUs and when their replacement would be likely. A steady pipeline is required for replacement of life-expired fleets, (assuming a one for one principle) as shown in Table 4, amounting to around 2750 vehicles. Again, caution is required, as, for example, the Cl.323 fleet, having been intended to be released by Northern for West Midlands, is now being combined into a single fleet at Northern to reduce the reliance on Cl.319s.

Over the period since privatisation of the UK railways in 1993, considerable fragmentation has occurred, something which the Williams-Shapps white paper is intended to address. Nevertheless, for any coherent, managed fleet strategy to be really effective, it will require the cooperation and involvement of all stakeholders, including the devolved authorities (Transport for London (TfL), Transport Scotland (TS) Transport for Wales (TfW), Transport for the North (TfN) and the Combined Authorities) and the rolling stock leasing companies (ROSCOs).

This demonstrates that a relatively small build of 20 x 3-car 25 kV ac EMUs is required in 2025, which would serve as an ideal pilot for subsequent larger fleet introductions. 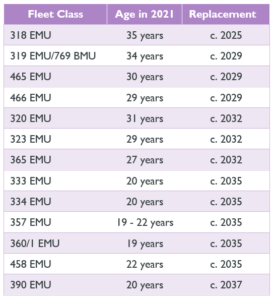 Table 4: Electric powered vehicles required (one for one) 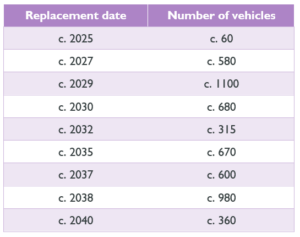 Several ROSCOs have promoted and developed life extension initiatives for various fleet assets within their portfolios:

Porterbrook Leasing has developed a bi-mode version of the Cl.319 EMU, the Cl.769 BMU, including a full overhaul and corrosion removal, so the c. 2029 replacement date predicted may be pessimistic.

In addition, a Cl.168 was recently unveiled with an MTU hybrid power-pack that uses a motor/generator within the drivetrain to charge a battery with regenerative braking and use that battery power to provide traction power when required.

Eversholt Rail Group has promoted several initiatives involving its Cl.321 fleet, to improve its competitiveness in the market and in so doing, ensure it remains on lease. In 2013, it rolled out a demonstrator train, branded Renatus, which had been updated internally and been equipped with air conditioning. This led to 30 x 4-car units being upgraded to Renatus specification in 2015-16, including the installation of ac traction. Despite this, the new East Anglia franchisee in 2018 opted to order new trains and dispose of the Cl.321s.

Eversholt is now working with Alstom to develop a hydrogen powered prototype called Breeze and if this is successful, it intends to use the off-lease Cl.321 units to market this as a green alternative to diesel.

Angel Trains has developed a battery hybrid modification for its Cl.165 fleet, where the unit can run on battery only in stations areas, and can recharge the battery through the diesel engine and regenerative braking. This approach may enable some diesel-only fleets to be life-extended beyond the UK Government’s 2040 diesel-only ban.

Angel has also worked with Transport Scotland and ScotRail to roll out a fleet of short-formed High Speed Train (HST) sets, implementing substantial modifications such as powered doors and accessible CET (5) toilets.

Simplification is more important than nationalisation

In the Williams-Shapps Plan for Rail (6), there are references to the large number of fleet types operating:

Overcomplication appears built into many aspects of the rail network. There are around 75 different types of train in passenger service on today’s network, imposing greater costs in maintenance, regulation and crew training. No commercial airline would have that many types of aircraft; no bus, coach or lorry company that many types of vehicle.

Efforts have been made recently to address this. Abellio’s winning bid for Greater Anglia included reducing the number of fleets from eleven to three.

Nonetheless, having individual train operators making procurement decisions is unlikely to result in a homogenous fleet at a national level, nor is it likely to significantly reduce the different types of train.

Realistically, there are only two viable ways to substantially reduce the number of fleet types, either to:

To replace the individual fleets as set out in Table 1 and Table 3, the sectors that satisfy all of the future requirements can be defined as shown in Table 6, which demonstrates there is sufficient volume required in each sector to make product development viable. 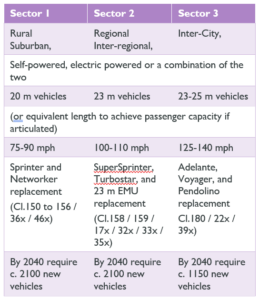 Based on an approach of selecting an existing market product in each sector, the products that meet the basic characteristics are as in Table 7.

Table 7: Products for each sector 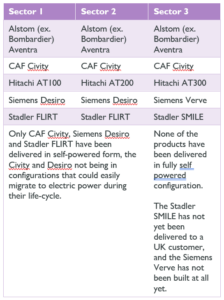 Three important aspects of ensuring a train can be converted from self-powered to electric configuration during its life cycle are:

Should use of existing products not be a viable option, it will be necessary to embark on a programme of product development, with the objective of having market-ready products available by the time they are required.

Based on the replacement dates set out in Table 2 and Table 4 these dates are approximately as follows:

If a rolling programme of product development were to start by the beginning of 2022, it should be possible to achieve these timescales, as long as the following principles are accepted and respected:

All the metrics set out in this paper assume a status quo in terms of the parts of the UK railway network that are electrified and the parts that rely on trains being self powered.

The UK Government aspires to electrify additional parts of the network, but until this is confirmed with firm dates, it is impossible to assess how many self-powered and electric powered vehicles will be required. Crucially, the total number of vehicles required will be the same and if products are developed around electric drives and simple reconfiguration, the fleet requirements can be partially divorced from the electrification decisions.

As the Williams-Shapps Plan rightly says, the large number of fleet types operating in the UK is not conducive to controlling cost. The two alternative methods to push towards homogeneity are radically different, but if delivered successfully, both would achieve the same outcome.

However, the more radical proposed strategy of standardisation and GBR IP ownership, may be the preferred option since it provides an opportunity for the railway to be in control of fleet specification and procurement, while maintaining competitive tension in the market.

With at least four UK manufacturers (Alstom in Derby, CAF in Newport, Hitachi in Newton Aycliffe and Siemens in Goole), an opportunity exists to move towards national self-sufficiency in rolling stock manufacture, with a clear path away from the “feast or famine” ordering pattern that has been more commonplace.

(2) Assumes that diesel-only rolling stock will not be permitted beyond 2040 and the fleets have not been converted to alternative power.