Home / Insights / Are you sitting comfortably?

Are you sitting comfortably?

In recent years, many trains have been introduced with seats that are generally considered less comfortable than the seats on the trains they replace. Measure of seat comfort has always been a difficult aspect of train specification, and a common solution to the problem has been not to write anything at all. This has resulted in the situation where, as train manufacturers strive for slimmer seats to improve the overall capacity of the train and meet the customer’s capacity targets, so the comfort of the passenger gets ignored. This article investigates some of the issues surrounding seat comfort and puts forward a recommendation for future research.

The first impressions of the new Thameslink train when they were introduced were that they were a marked improvement on those they were replacing. However, much was written about the seats. As one passenger reported:

Within two minutes I had back ache and had to stand up. Fortunately I was only going from St Pancras to Blackfriars. Imagine if I was going from Bedford or Brighton to London? I would have to choose to stand for the journey or buy a cushion.

Unfortunately, this seems to happen more and more frequently. The Class 374 Eurostar trains got a similarly poor reception when compared with the original seats in the Class 373.

The Class 80x AT300 seats have also been written about. Roger Ford and Ian Walmsley both have written extensively on the subject of uncomfortable seats. So what has happened?

Often seat comfort is ignored in new train technical specifications. That is because it is quite difficult to determine. One specification from 15 or so years ago stated seats should be “no harder than the existing trains” conveniently leaving the manufacturer to determine the answer. The manufacturer merely produced a seat and suggested the customer prove if they could that the seats were harder than the predecessor version.

Seat comfort potentially has suffered as fire regulations have become more stringent, meaning that manufacturers reduce the foam inside a seat to the smallest possible amount to ensure the tests are passed.

Added to which, there is an ever-increasing demand to increase the number of seats in a vehicle. This can be achieved by increasing the length of the vehicle as demonstrated by Hitachi’s AT300 design, but also by slimming the seat back. 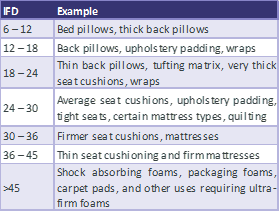 However, seat hardness can certainly be measured; there is a standard commonly used by the Polyurethane Foam Association to measure indentation force deflection (IFD). IFD is defined as the amount of force, in pounds, required to indent a fifty square inch, round, indentor foot into a predefined foam specimen by a certain percentage of the specimen’s total thickness.

One size does not fit all

For many years, anyone over about six feet tall found that travelling by train, although infinitely more comfortable than a bus, was still not the most comfortable exercise. This was often indicated by the rapidity in which the priority seats were taken up as they give that extra legroom.

Additionally, seats on some trains have been set lower than knee height and leaves the tall user in an ungainly and uncomfortable semi-squat position. The seats on the BR multiple units that use the Mk3 bodyshell are classic examples of this, as are the “Mallard” seats on the Mk4 carriages. Interestingly the original Mk3 seats, although of similar height, are more comfortable, because they are more reclined. The question then is, what anthropometric data is being used for seat design, and does it represent the modern demographic of travellers?

A glimmer of an idea

For many years, the IPEX York “office” used desk seating accommodation in the form of an IKEA chair made of laminated plywood. It had no cushioning at all, excepting the gas strut, and yet an eight-hour session in front of the computer was not a chore, and twelve-hour stints were undertaken without ill effect. So why should this be so comfortable and yet some more padded seats be less so? Office chairs are designed to be sat in all day. Seats on trains are not, but intercity trains should really be designed with that same ethos.

The immediate answer is that the office chair can be adjusted. The IKEA chair is not a fancy seat; it only has one adjustment, but a crucial one – seat height.

Imagine if height adjustable seats were introduced onto passenger trains? There would be obstacles to overcome, such as how to work the mechanism and how to make it robust enough to cope with the demands of the travelling public and the occasional wilfully destructive occupant.

However, research into this may well provide the answer to the comfortable ride that has eluded so many recently. Given the plethora of research such as the “adaptable carriage” for carrying freight off –peak, there is no reason to suggest that such a concept would not attract funding or that the funding would be misplaced.

Since the original version of this IPEX Insight was published in 2017, RSSB has conducted a research project “Defining the requirements of a seat comfort selection process” (reference T1140) on behalf of the Vehicle Vehicle Systems Interface Committee (V V SIC) and the Seat Comfort Group. This has already seen industry take-up with First Group making use of the research findings to inform its rolling stock procurements, most notably for its forthcoming East Coast open access operation.