Every year there are a number of derailments on our railways; most not getting any media coverage. This is no surprise as a train carrying stone that falls off is not very newsworthy particularly if it occurs, as many do, on a freight only line. However, if a freight train derails on the mainline we do tend to hear about the ensuing chaos, particularly if it delays commuters on their way home. Such derailments do tend to cause significant damage to infrastructure and signalling, causing delays to the wider network. Some method of reducing the severity of freight train derailments would be beneficial, not just to the operator of the train and Network Rail, but also to the wider railway industry and railway users. This paper presents an idea for this.

A review of RAIB reports show that there are a number of derailments every year that do significant damage to the infrastructure but the magnitude of the damage is potentially avoidable.

Table 1 shows derailments since 2005 where, with the exception of two cases, the driver has been unaware of the derailment and the train has been stopped usually when the signaller sees the disruption on their panel, or by splitting of the brake pipe. 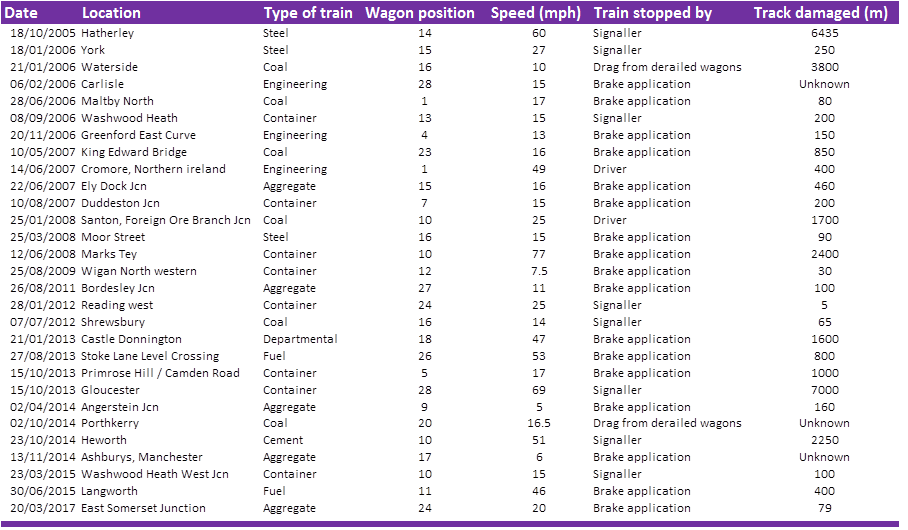 Compiling this table showed that the type of wagon, contents, prime mover, train speed, or position in the consist of derailment initiation, has no predictable impact on the amount of damage caused. It was also clear that the impact can be significant, despite the fact that most derailments occur at relatively low speed, as shown in Table 2.

The challenge is whether the severity, and therefore disruption, caused by derailments of freight trains can be limited by alerting the driver of the derailment before the damage causes the train to be stopped by other means? We think it can be.

However, both those systems require additional equipment in the locomotive and both rely on an isolated power source and communications equipment which would require health monitoring.

We therefore considered systems which were locomotive based and so could be relatively self-contained. As previously suggested, acoustic monitoring could be utilised but it could be argued that the derailment of say, the rear wagon of a “jumbo train” may not be acoustically detectable from a locomotive at speed.

Following previous involvement in the development of machine vision systems for monitoring of wheel treads and brake blocks, it is proposed that automated CCTV could be used to monitor the behaviour of the wagons of a train and send an alert on the detection of unusual behaviour.

Due to the constricted loading gauge of the GB rail network, wagons tend to be manufactured to the maximum possible size, which does provide some challenges in providing a clear view of the wagons of the train. However, we believe this can be overcome.

The use of forward facing CCTV (FFCCTV) has become standard on passenger trains over recent years and has been demonstrated as most useful in determining incidents, particularly involving trespass and track workers. Our solution would be to fit all freight locomotives with FFCCTV in the form of two cameras at each end, one on each side of the cab at cant rail level. These would be fitted with infrared capability to enable continuous vision even in tunnels and during the hours of darkness.

The FFCCTV at both ends of the locomotive would record the usual visual output for the purposes of reactive post-incident review. The FFCCTV at the rear of the locomotive would be actively monitoring the state of the train and would alert on unusual activity via a resettable indicator on the driver’s desk. A future development may be the displaying of the CCTV image on the driver’s console following an alarm to enable the driver to review the severity of the situation.

The CCTV cameras would be set to view down each side of the train. The use of two cameras would prevent blind spots caused by the curvature of the line and would assist in the determination of the derailment through the visual alignment of the sides of the vehicles.

There are of course difficulties to such a development including how to prevent the CCTV from sending spurious alarms so it is likely that testing on disused or private railways would be required.

However, the benefits of such a system would be: