On 12 February 2018, the Rt. Honourable Jo Johnson, then Minister of State at the Department for Transport, announced a new ambition to “take all diesel-only trains off the track by 2040”. This statement, coming after the Government’s recent cancellation of several electrification schemes, has encouraged the industry to examine other on-train sources of energy. These have included batteries and supercapacitors, alternative-fuel engines, hydrogen fuel cells, and solar panels, often in combination to form hybrid units. Today, battery energy storage on a two-car DMU could be equivalent to 120 kWh capacity which would provide diesel-free operation of a 100 t (2-car) unit over distances of between 5.5 km and 10 km. Battery storage on a three-car EMU could be sufficient to provide in excess of 40 km catenary free running.

Extending electrification is relatively expensive, disruptive to operations and, being fixed infrastructure, reliant to a large extent upon Government funding. This paper explores the opportunity to reduce electrification to a bare minimum, using the rolling stock capability to provide the long-term solution, which can then be funded through means other than the Treasury.

The case against electrification

Electrification enables high-capacity, high-efficiency, high-reliability and low-carbon railway system operation over the long term, with less equipment, complexity and weight on the train. It uses electricity that can be drawn from a variety of sources remote from the railway and optimised separately for available technology, environmental, and capacity requirements. However, the capital cost of electrification works is sufficiently high to be prohibitive in some cases and difficult to justify in business case return timescales.

Electrification installation is invasive and disruptive, and may even be subject to architectural or aesthetic restrictions (e.g. at Sydney Gardens in Bath). The disruption during electrification works can continue for many years, even when electrification “factory” trains are used, causing disruption to passengers and also to users of other fixed infrastructure such as bridges, which may need to be modified or rebuilt.

The rise in the use of the bi-mode trains (fitted with both electric and diesel traction sources) has been facilitated, in part, by the Government using the Intercity Express Programme (IEP) to reduce electrification schemes in favour of greater reliance on the bi‑mode capability. Since the ambition stated by Jo Johnson MP to remove diesel-only trains from the GB network by 2040, greater focus has been given to methods to hybridise diesel trains with other energy sources.

The most popular hybridisation is through the use of batteries and it led to MTU developing a power pack comprising a diesel engine and gearbox and an additional generator / motor providing electric traction through the existing drivetrain and battery charging through energy capture from regenerative braking. Both CAF and Stadler now have units available with hybridisation either fitted from new or designed (to a varying degree) to be fitted at a later date. However, if the desire is to reduce pollution through the removal of diesel engines, then a DMU with batteries, or an electro-diesel bi-mode train is arguably a sub-optimal diesel-centric solution.

An alternative approach, where non-electrified line sections can be kept in relative proximity to electrified sections, may be to start with an EMU fitted with energy storage to enable it to bridge gaps in electrification. In 2015 Bombardier trialled the independently powered electric multiple unit (IPEMU) Electrostar over the relatively flat land in East Anglia. The trial, using a 425kWh battery, determined that a range (or gap) of 30 miles (48km) was achievable. Significantly, in 2017, CAF tendered to Auckland Transport a Civity EMU that would operate there and back over an 18.5km branch line (37km total), the line rising 88m in elevation over the 18.5km. Although installed power figures are not available, it was to use SAFT battery modules which come in 212 and 238 kWh modules and the batteries would be fitted on a single vehicle as was done in the case of the Electrostar. What was particularly significant about this milestone was it was a commercially tendered solution, with a manufacturer performance guarantee of 5 years. 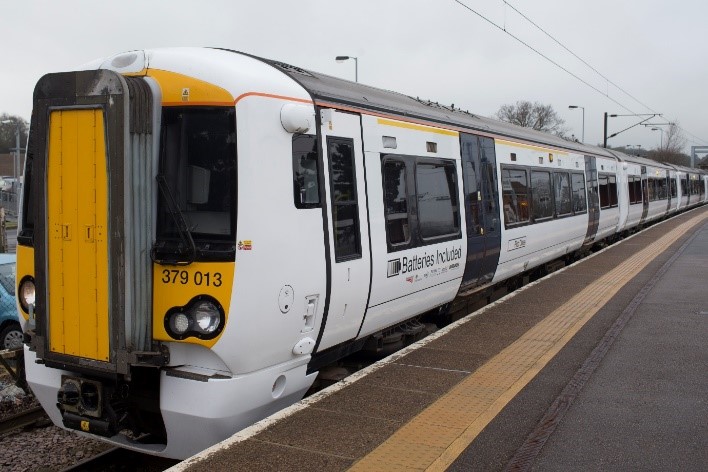 Both these examples used batteries to provide the on board energy storage. However, hydrogen is also being offered as a viable solution.

There are various schemes for the use of hydrogen fuel cells on rolling stock. Hydrogen, like electrical batteries, uses or stores energy created elsewhere. Challenges with hydrogen include the relatively low energy density – some quarter that of diesel when stored under pressure at 700 bar, compounded by the need to store it in cylindrical pressure vessels, which is an inefficient use of space compared to a diesel tank, which can be a space-efficient cuboid, if not shaped to fit the available space envelope on the rolling stock (including the loading gauge). However, like all innovation, such issues are there to be resolved and following the introduction of the fleet of Alstom Coradia iLint EMUs in Germany, Alstom has teamed with Eversholt to create a hydrogen fuel cell powered Class 321 unit as a trial.

As argued earlier, battery technology development is more advanced, with a range of 40+km already available and this distance will only increase over time with further development. However, the IPEMU trial also demonstrated the criticality of the recharge rate, and sustained running on the electrified line for around 40 minutes was required to recharge the batteries.

More recent work by manufacturers such as CAF and CRRC has seen a rise in super-capacitor use, particularly in light rail and metro applications. These devices can withstand much faster charging than batteries and so could be part of a solution for routes where fast charging is necessary.

Expanding on the concept, encountered above, of electrification with gaps, the wired section could serve as a ‘hub’ from which operation on unwired sections could be supported by batteries, charged whilst at the hub. Stations would make good hubs since they are where the train will spend a maximum amount of time (for charging batteries) for a given amount of wired section, and the energy-hungry acceleration away from the station could be on a wired section, turning what would otherwise be a heavy drain on battery charge into extended battery charging instead. Additionally, stations could potentially be “hubs” from which more than one line radiates.

As the unit enters the wired zone, a passive balise would signal the unit to raise its pantograph, shut off battery power and then close the vacuum circuit breaker (VCB) to draw power from the wire. This could also be achieved manually as is the case with the IEP units but a passive balise is a low cost solution to maximise effective time under the wires. The unit then starts replenishing its batteries, and as it starts braking, the regenerated kinetic energy would also be diverted to the battery recharging circuit. The unit then continues to recharge from the wire whilst at the station stop and as power is retaken for traction to accelerate the train away from the station. As the unit approaches the end of the electrified section, a second passive balise opens the VCB, switches the unit to battery power, and then lowers the pantograph.

In addition, unless the non-electrified section to the terminus is short, it may be necessary also to electrify the terminus station. This could be managed differently, by fitting an auto-coupler arrangement to the buffer stop, enabling the unit to recharge through a special power plug, by “coupling up” in the same manner as coupling to another unit.

One of the aspects that has increased electrification costs so significantly is the requirement for increased clearances and the need to raise structures to clear the catenary. Since stations are generally areas that can include a large population of overhead infrastructure, such as footbridges and road bridges, bar contact could be utilised in place of wire and catenary in order to minimise the clearances required from the fixed infrastructure, and remove some of the requirement for invasive modification to such structures. 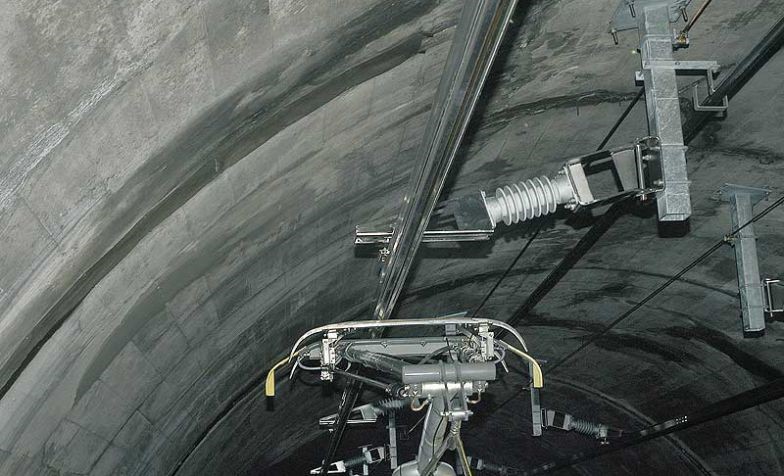 IPEX is currently in the early stages of developing mapping of the existing electrification, and the potential distances that could be covered by an EMU with battery power (IPEMU). This will provide a map of those routes that can be hub-electrified and so can be considered part of the DMU-free infrastructure. This mapping will then enable the highlighting of those stations at which electrification would provide the most benefit.

Batteries are currently expected to last in the region of around seven years. If a pessimistic view is taken that batteries only last 6 years, then a multiple unit with a 35 year design life would need its batteries replacing five times during its life. 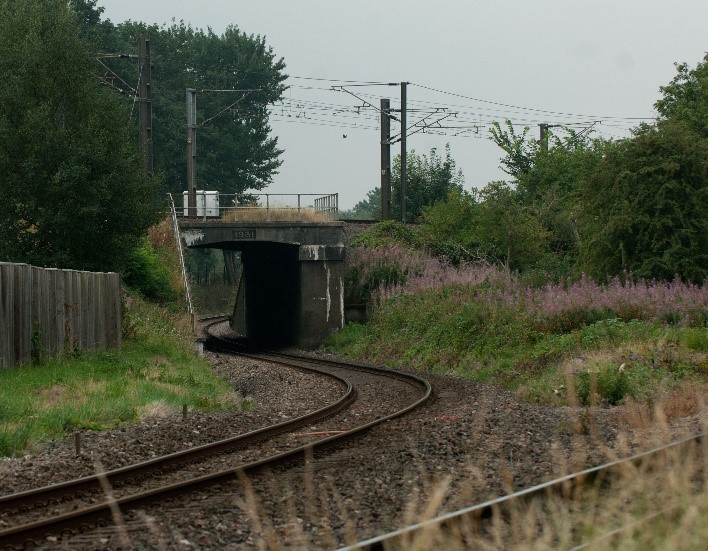 Not only would a manufacturer or owner have to consider the life and technology of the battery, the disposal would also need to be analysed. However, if the battery manufacturers entered the market as battery leasing companies, possibly employing the rolling stock financiers for funding, or attracting new funding from other sources, the burden of battery renewal, as well as migration to future improved battery technology, could be lifted from the operators of the units and wrapped up within lease pricing.

In terms of the batteries themselves, a concept could be developed whereby the battery module is a thin skin, similar to that used in mobile phones, laptops and some battery cars, and distributed down the length of the vehicle between the floor and the carpet, thus spreading the mass while also reducing the space requirements on the underframe.

A number of potential benefits are foreseeable or worthy of consideration: